Berlin vs. London: Are you considering making the move?

We are seeing an increasing number of Brits, particularly Londoners moving to Berlin. This comes as no surprise, with 36% cheaper living costs, so if you’ve ever thought ‘I want to move to Berlin’, we’ve put together a quick guide to inform you of some considerations to make if you plan on making this a reality.

There’s a lot to think about when you’re relocating - particularly to another country, which includes considering the work-life balance, affordability, living costs, salary, shipping and moving costs, visas etc.

It’s not an easy thing to do, but you may find, like many ex-pats already have, that it is a better quality of life. According to the World Population Review, Berlin’s population is just over 3.5 million and around a third reportedly come from a non-German background.

There are various aspects to consider that you may not be aware of changes in recent months.

In June 2019, the German finance minister backed proposals for a five-year rent freeze to tackle the rising cost of living in Berlin, warning that: "We don't want to end up like London”.

It will mean around 1.5 million homes in the capital will have their rents frozen for five years and capped at €9.80 for Kaltmiete (cold rent, or costs before utilities) per square meter.

The law on the rent cap (Mietendeckel) still has to be passed by Berlin's House of Representatives. That is likely to happen in the first quarter of this year. The law will then be applied retroactively from June 18th, 2019, which means that any recent rental increases may be deemed as not valid.

It should be noted that the regulation to reduce excessive rents will not take effect until nine months after the law is passed.

The cost of some modes of transport has decreased, as of last month (January 2020). After the federal cabinet agreed to lower the VAT rate on tickets for long-distance travel, Deutsche Bahn committed itself to pass the savings directly onto its customers, which is nice of them.

From January, the cheapest Intercity-Express ticket (ICE ticket) will be 10 percent cheaper. Prices look to be coming down across the board, so this bodes well for commuters.

Although the public transport in Berlin is known to be excellent, the U-Bahn stops running around 1 am between Sunday-Thursday, so an expensive taxi is your only option if you are planning on partying the night away. Which, with Berlin’s renowned nightlife, may be worth the cab fare.

Berlin is known for being green. Often dubbed the World’s vegan capital, the city also sees its inhabitants taking recycling and environmental matters very seriously.  Additionally, there are a lot of workers who ride their bikes to work or take public transport. Berliners are doing their bit.

In terms of living costs, in the UK, ‘green’ energy may not always be the cheapest option. According to sources in Berlin, the surcharge that green electricity producers receive for feeding into the grid will increase from 6,405 cents per kilowatt-hour to 6,756 cents from 2020. This levy (making up 22 percent of the cost of electricity in Germany), has been decreasing for the past two years but is now on the up. Some electricity providers have already announced that they will increase their prices. However, according to Clean Energy Wire, market observers say that power costs are often not even high enough for customers to look for cheaper alternatives.

Depending on your timeframe and budget, you have a couple of options in terms of getting your household belongings to your new place in Germany. To ship a household size of a 1 bed, by road (which takes 2-4 days), this can cost you £1,400 – £2,000, whereas, the cost to ship via Sea (which takes 25-31 days) can cost £2,200 – £3,100. There are various companies who offer international relocation services, so worth ‘shopping around’. This is all seems obvious, but with all of the aspects to manage, it’s certainly worth weighing up what works for your move.

Of course there is paperwork when making a move this big, but it is worth noting that for some, it’s seemingly relatively easy.

If you are a European Union citizen and wish to do paid or self-employed work in Germany, you do not need a visa nor a work permit in accordance with European Union Regulations. Since 31 January 2020, Moving to Berlin from the UK will have updated regulations and rules on making the move.

For non-EU Nationals, in order to work in Germany, you will need a residence permit before you enter Germany. There are two types of work permit - general employment and self-employed.

So if you are looking for a Berlin Freelance Visa, depending on where you are coming from or your job set up, we can help you work this out. We can help you secure jobs in Berlin with Visa Sponsorship.

There are other considerations to think about in terms of the documents required when relocating for work, or if you are moving to Berlin without a job. This site gives you a good idea of what to expect.

In order to obtain a residence permit to work in Germany as a Non-EU National, the employer and employee must prove that: There was a shortage of employees that are from Germany or the EU, so the position could not be filled by them, and that the employee will have the same conditions as any other German employee in terms of salary and working environment.

The salary potential in Berlin, compared with what you may be paid in the UK for a relative job is, in fact, lower but due to the cost of living being so much cheaper, this is not an issue for most. There are a number of relocation consultants in Berlin, but for a more personal approach, we interviewed VP of Product Management, Colin Roper, about him Relocating to Berlin so you can hear his views.

There are a number of factors to consider when making the move to Berlin. Below is a quick-reference table illustrating how Berlin comes out on top against London for the majority of factors.

Consortia can help you with your job relocation to Berlin, so if you have been thinking about moving to Berlin to pursue a better standard of living, it’s worth checking out the available jobs in Berlin with Visa Sponsorship, whether you’re looking for Product Management jobs in Berlin, a UX designer job Berlin, UI Design jobs or Software Development jobs in Berlin or other areas in Germany, we can help. 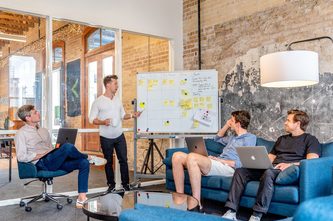 Why become a Product Manager?

Consortia have been exclusively assigned to find a Mobile Product Manager for a tech start-up in Berlin who are trying to revolutionise the pet healthcare space. After a few years of being ...

I am currently looking to speak with experienced Java Engineers looking to take the next step up into leadership, or established Team Leads for an exciting opportunity in Dresden. You will be leading ...

Senior eCommerce Product Owner - B2C Applications Consortia is looking for a Senior Product Owner to join an established product team with a well-known eCommerce organisation in Berlin. We are ...