With over 20 years of experience in digital, Dr Nick Fine has been lead UX on projects for a number of brands, including Coca-Cola, BT, Virgin Media, the UK Home Office and Bentley. By combining his HCI knowledge and academic research skills with commercial UX experience, he has successfully delivered a number of complex and important projects, including financial systems, air traffic control, and pharmaceutical drug trial planning.

Nowadays, he has his own UX psychology channel on YouTube and works primarily as a researcher. With his areas of expertise ranging from remote user testing to transformation through user experience, we asked Nick about the state of UX, exploring why he believes the definition has changed in recent years.

Nowadays, many people struggle to differentiate between UX and UI, which is hardly surprising considering the differences are subtle and the specialities overlap. However, eight years ago the differentiation was less confusing - you simply had UX designers and then you had UI and visual designers. It's only in the last four to five years where the two have merged into the same role. For Nick, the primary reason for this is because "no one can agree on what UX actually is, which also makes staffing really difficult." He also believes there's a skills shortage, and that people are redefining UX according to their own needs.

He adds: “UX, when I started out, and for all my mentors and all of my role models, was always about research and design. These days they call it ‘generalist’ or ‘hybrid’, but I can’t name any other industry or vertical, or any other role, where you just turn up and they expect different things of you. It’s like turning up with a plumber and expecting them to have carpentry skills."

Four years ago, the role of a UX architect was very apparent (somebody who had strong research skills and strong design skills). As Nick says: "They're the all in one, full-service practitioner. So what they do is they'll conduct the research, then they'll go and develop the prototype, then they'll go test the prototype."

However, UX Architect job titles have now ceased to exist, as according to Nick "keeping research and design separate is an easier staffing structure." While some believe this is beneficial - because one person alone lacks the depth and skills to be an expert researcher, expert UX designer, and expert visual designer - many small businesses are still looking for 'UX unicorns', or individuals who are awesome at everything. Nick, however, urges recruiters to be cautious: "You do get occasional unicorns who are awesome at everything, but they're the exception, not the rule. They represent only 2% of the audience and the other 98% are researchers or designers."

Despite previously working as a UX architect, Nick doesn't seek these roles anymore. Why? Because he worries he'll be seen as a generalist: "People would think one of my skill sets is weaker than the other. These days, I'm simply a researcher. Personally, research is my strength, it is where I come from."

So does Nick think people should specialise? "The unicorn concept doesn't work anymore. My advice to people who are at the start of their careers or even those who are 5 or 10 years into their careers, is to potentially look at how you can specialise. Look at where your passions are. If your passion or your skills are in research, look to further develop that skill and hone that as an opportunity."

Nick believes research is more important than design because without it you're blind, and you don't know what's going on in the world. As a result of this, he'd like to see the emergence of chief experience officers happen sooner rather than later: "We're already seeing that design is handled by a creative director. That world is well established. But research is trying to find its way. It's trying to fit into the digital development process. Having a research director or a head of research who is doing the same thing as the executive creative director, but on the research front, is what's needed."

A lot of the arguments that occur in UX teams are evidence-driven, and chief technical officers often feel like all the decisions fall on them, but this doesn't have to be the case. Nick says: "Someone will ask me where a button should go. I'll tell them what I think, but I also encourage them to test it first. Ultimately, it's about having a culture of evidence and encouraging evidence-driven decision making - it's simple really."

Ultimately, UX is in a state of flux. However, Nick believes we need to be encouraging people with psychology degrees to step forward: "They are the next generation of researchers. We've got great designers out there, but we haven't got good researchers.

Thank you to Dr Nick Fine for speaking to us on the state of UX. Are you interested in securing a User Experience job? Or alternatively, please send us a UX job brief.

How To Get Into UX: Tips from Consortia UX Consultants 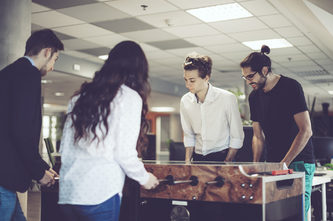 A digital agency that works with some of the best business’s in the world on their digital strategy are looking for a Content Strategist to help deliver outstanding content that reaches the ...

Are you looking for a role of Creative Director, where you will be working for a company with a global presence where you will help to develop their identity and manage a team of creatives? ...

Ready for your next Product Design contract and want to be part of a star up that changes the way people shop? They have recently launched their new B2C native mobile app. They are looking for ...